With similar designs, both the TROVE Cash Wrap and FOCX Accountant wallets demonstrate great minimalist designs with enough differences to present a choice.

With similar designs, both the TROVE Cash Wrap and FOCX Accountant wallets demonstrate great minimalist designs with enough differences to present a choice.

We recently reviewed the FOCX Accountant minimalist wallet and it goes without saying that its functionality resembles another familiar wallet we reviewed on the channel, the TROVE Cash Wrap wallet. So today we’re going to do a comparison between the two.

While these two may look the same, they do diverge in functionality and features. On the outside, and without any need to open up the wallet itself, both have a quick-access pull strap which gives each the ability to place cards inside the wallet and extract them via the pull strap.

But once we get past the quick access pull strap feature, it starts to diverge between the wallets.
We open up the TROVE Cash Wrap we see an additional slot for card storage. But wait, I thought the FOCX Accountant had the same capability? You’d be correct. It has the same secondary, interior card slot.

When the wallets are fully opened is when the difference begins to be obvious. The TROVE Cash Wrap is a trifold, opening up to reveal a small coin pouch in the middle fold and the ability to lay cash flat, with the bottom of the cash being anchored to the bottom third behind the elastic. This placement allows the cash to be folded up for storage.

The FOCX Accountant opens once, a bifold. Cash is folded once, then placed behind the elastic as anchor, then the flap folds over. They say it can hold coins, but they would need to be stashed in the corner of the fold to keep them from falling out. It looks more like an afterthought.

Between the two, I really like how the TROVE Cash Wrap handles coins and how the FOCX Accountant handles cash. From a construction perspective, the TROVE Cash Wrap is designed and made in England. This particular wallet is made from a vegan friendly material, but they also have wonderful Italian veg-tan leather along with Italian elastic in all their wallets.
The sewing is done well and the edges are finished nicely.

Looking at the FOCX Accountant. it’s all leather, a full-grain, veg-tan leather and it begins to demonstrate the one thing I don’t quite like. The leather was a rough cut which exposes the fibers of the leather on the edge, which you can grab with your fingers and pull out. Proper edge finishing addresses these problems and provides for a nicer finish. The flesh side is a little rougher than I would prefer, but that’s a personal preference. The elastic is made in Germany and has the ability to stretch 110% of its size, but it is very thin in width versus the TROVE Cash Wrap.

The problem we have with the FOCX Accountant is the twisting and binding of the smaller elastic when using it. The larger elastic of the TROVE doesn’t have this problem.

The TROVE, in particular, comes in all kinds of colors and configurations. On the FOCX, not so much, but they do have some additional colors they’re coming up with. The TROVE comes in at a size of 3.3 x 2.3 x .4″. The FOCX is very close. at 3.3 x 2.3 x .2″. The weight comparison shows the TROVE at 33 grams, the FOCX is 23 grams. Just a little bit lighter, don’t know why. The TROVE is priced at $50, the FOCX is $44. All of this is really close to being negligible in importance here. From a capacity standpoint, the TROVE indicates six cards and five slips of cash, plus coins. The company indicates it can hold up to 10. The FOCX is six cards, five slips of cash, and the company says it can hold up to eight.

From a usability perspective things get different. Let’s take a closer at the Cash Wrap. The biggest concern is how it stores cash. On the bottom third of the wallet there is a flap which is sewn on the bottom. This is where you insert cash and with the elastic wrapped around it holds the cash. But that’s where we see problems. With even a marginal number of cards, it creates pressure that makes it hard to insert cash. When you’re in a hurry in a shopping line, it makes it a nuisance.

In comparing final scores, they’re very close, but the biggest difference is in features, that’s where the Cash Wrap can handle coins explicitly, much better than the Accountant. Other than that they’re all very equally scored. 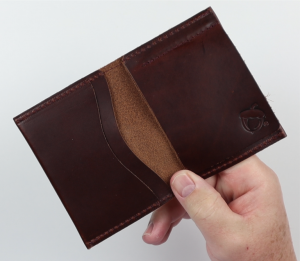