A brief exploration of why do men continue to purchase more wallets with more frequency. Why are we talking about this? With the consistent release of more new wallets every week, you’d think the collective first-world would be losing full dumpster of wallets. We think it’s more of a hobby/habit situation. But you be the judge.

With all the new wallets hitting the market every week, you’d think the collective first-world would be losing its wallets all the time.  There are seriously only so many configurations of a wallet to drive mens wallet prestige. The basic bilfold (bi-fold) wallet hasn’t changed in its core function for more than 40 years (when the credit card came on the scene).  There have been some very creative interpretations which can be seen frequently on Kickstarter, as there’s a new crop of wallets being launched there almost every week.

But honestly, wallet psychology regarding why we purchase wallets is fascinating and continues to fuel the reason why I think men continue to purchase essentially the same thing over and over again. For being something we think very little about, we tend to spend lots of time looking and buying many of them.  And it’s not like there is collector value, appreciation of the asset over time or anything substantial. We look at our wallet a couple times a day, which to me means we get bored with them quickly. And since it’s a small item, our perception is that replacing it shouldn’t be too expensive.  Except for the fact that many wallets can be the cost of some very expensive pair of leather shoes. Besides the practical observations, it’s safe to say that men like collecting wallets, always searching for the next best one. So let’s break this down a little further to understand what drives the desire for new wallets and how does that relate to the idea of men seeking some sort of wallet prestige?

Why are we so quick to abandon what we know?  When looking at wallets, several factors contribute to the evolution of this thinking. These factors include behavior, technology advances, function, form and finally prestige.

An interesting factor driving mens wallet prestige to purchase more wallets, is due to the never satisfied quest to organize and reorganize the contents of our wallets.  The thinking goes that there has to be a better, smarter, more clever way to carry the few things we have in our wallets. Also, the allure of “new” and “shiny” is always an attraction, and when the price point is usually less than $50, it’s a no brainer.

True wallets, in the form factor we know them as today, have only been around for 40 years. Before then, cash was king, so were coins and other documents.  Before credit, you had to literally carry what you needed with you. So when the credit card came around, the need to carry large amounts of cash slowly, but inevitably decreased.  Additionally, with the move to refillable cards, you don’t even need to have physical cash in your possession anymore. And with physical door access having moved to electronic cards, there is really no bulk necessary in wallets.  Designers are also trying to cram new technology into wallets to increase the allure. Why not put a power cell in there? Or a tracking tile? How about apps that work with the tech in your wallet to send you alerts? So with technological advances, wallets have evolved to be smaller, more minimalistic designs.  Expanded use of mobile phones for many of these technologies, has also made bulky wallets obsolete and creates opportunities to link the two. You see this with wallet-esque integrated card storage in your cell-phone case. With the speed of technology you’d think you’d need a new wallet every few years, but you’d be wrong for many men…that’s simply too long to wait.

Again, function has evolved, but not much in the last 40 years.  So as mens wallet anxiety and prestige has been building, we’ve been converting bulky items into small, more compact ones.  Thus, the wallet has been able to offload many heavy things while at the same time becoming an organizational welfare state for our pockets.  What the new wallet has provided many is the ability to move loose pocket items into the wallet. No longer does one have to have all pockets filled or occupied with something.  The wallet is now more than capable of holding and maintaining those items. Need a pen? You can get a small wallet pen to provide that quick access when needed. Need your keys?  Many keys have been removed through electronic access cards, proximity or via punch/touch-pads so the single key you might need can be in your wallet. Everything else has probably been replaced by an app on your phone. Digitally replacing physical is a that trend will continue.

I think you get the idea from technology and function, the trend is toward small and slim in your pocket.  If the wallet has multiple card pockets, you’re covered. What else is needed? These same slots can be used for anything else you want to stuff in your wallet, but those who do wallet audits know that only the bare necessities are required, so keeping the form factor small and lightweight is the winner.  Most new wallets on the market are either 1) remakes of older designs with a fashion brand, or 2) a refactor of how things are stored in the wallet…always pushing them smaller, making them more organized or introducing a twist on something familiar.

Finally we get to mens wallet prestige.  This is the elusive factor, where psychology meets practicality, but more often is driven by fashion, vanity, public perception and most importantly, the cool and new factor.  What emotions do you have when you pull out your wallet and look at it? For many men, it’s a practical tool fulfilling a necessary function. But so are cars, clothes, hair, glasses, pens and watches. But while these other items are more visible and serve a singular purpose, wallets are always in your pocket, UNSEEN, UNLESS, you’re in front of people…when you’re paying for something, demonstrating your wealth, your savvy nature, cleverness or inquisitivity, waiting and WANTING those around you to notice.  So what is it that drives the prestige? Personal confidence in the wallet choice you made? The uniqueness of the wallet and the ability to stand out, talk about what makes it yours, and how it’s different from the uneducated masses? Or is it a demonstration of wealth and/or intelligence?

If it’s a combination of all three; personal confidence, uniqueness from the crowd, and the ability to demonstrate wealth and/or intelligence, then the trifecta is yours!  But honestly this is all a nice hypothesis. Let’s call it what it is, a first world hobby.

So what is mens wallet prestige? Like most things in life, wallet choices are a first-world problem.  We only elevate the importance of it when we try and justify its relevance to the world around us. Those who care will and those who don’t, won’t.  Ultimately, I say, get as many as you like, experiment, go cool, go practical and make this hobby yours. Happiness is a personal thing and if wallets provides a small part of that, then go for it.  You’re in good company.

Wraptor wallet from Alpha Leather is a compact killer!

Ridge vs Fantom R, worth your money? 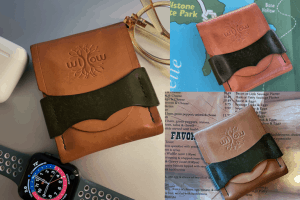 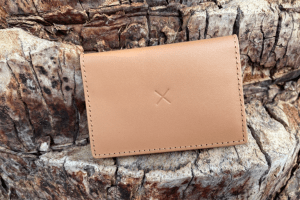 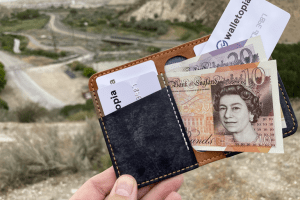