Back to the ORIGINAL! Andar Pilot slim REVIEW

You might remember version 1 (v1) of the Andar Pilot and more recent v2 version which had a wheel mechanism to push the cards up. Version 2 was discontinued, but demand persisted around the success of v1. Andar responded by creating Pilot v3, a pop up, box wallet, with a leather sleeve, back to something that works!

You might remember version 1 (v1) of the Andar Pilot and more recent v2 version which had a wheel mechanism to push the cards up. Version 2 was discontinued, but demand persisted around the success of v1. Andar responded by creating Pilot v3, a pop up, box wallet, with a leather sleeve, back to something that works!

You might remember Andar’s Version 1 and the most recent Version 2, a very cleverly uniquely engineered box wallet, which I have taken apart if you watched the video. While interesting, it could not beat the original design, so Andar has improved on the original Pilot and is releasing Version 3. If you love the original, then hang on, because it is back.

I got it in the black version, but it also comes in a camel tan, saddle brown, stone gray, and olive gray. It is great to see some inline advertising and marketing with this wallet. Version 1 was universally loved. So how does the new Pilot operate?

This box wallet has a strap, a quick access, and an exterior cash strap. It has a capacity of up to 15 notes, folded, which means more cash can fit in. When we flip it over, we can locate an external quick access card slot with the capacity of one to two cards. Finally, the main card slot is in the middle of the box and it can accommodate up to six flat cards or four to five embossed cards, and the trigger mechanism, positioned on the bottom, raises that up. It measures 4.3 x 2.9 x 0.6 and weighs 84 grams or 3 ounces.

The Company recommends up to six cards in the box and another two in the slot. All the currencies fit in, including the yen, which pokes out just a bit on the sides. Thus, excluding the Yen and the Euro, there are no issues with most currencies, and that works pretty well. This is designed in the United States and made in China from chrome-tanned full-grain premium leather. It has an anodized aluminum case on the interior, which provides natural RFID protection. Andar provides a one-year warranty, which they have on all their products. The leather has got a very well done sewing and it fits the box without issue. It may seem like there is a lot of extra space there, but trust me, you are not getting it out because it is tucked in nice and snug. However, if you need to take it out, you have the possibility with the aid of the nice looking trigger, which I think functions nicely. It is priced at $74.

Please watch the video if you want to get a comparative look at the original Pilot and the Version 3. They have a lot in common with the fade, as well as to the FIDELO, which we have reviewed in the past, which is very similar in how they function. We have got the anodized version of a box, and this one does not offer so much and is plastic. It is very similar and triggered, however, it is about half the price. Nevertheless, what we are talking about is an enhancement and understanding of customer and product.

You might remember the Version 2 of the Pilot, which I took apart.  It has a very clever internal mechanism and is a great try for it is very unique. Back to the Pilot Version 3, which hearkens back to the original Pilot, I like that the slider is much beefier than other box wallet’s like Exster and Secrid. Thanks to that, it will take a lot of damage before it breaks. However, the flip side is that it does stick out quite a bit and has pointy edges, although not sharp as they would seem. The mechanism inside, on the other hand, does not have a beefy push and fan bar as other popup wallets we have seen, but it handles the task just the same. Despite being nothing too fancy, it is easy to use, solid and gets the job done, very much like all Andar Wallets. Overall, Andar Wallets are no-nonsense, they are instead, get the job done wallets, with a wide breadth of configurations. They do have a lot of wallets and the new Pilot returns to what worked well, and it is great to see it back as an offering.

The final score of the Pilot Version 3 is 4 for quality because the leather fit is good and the box quality is comparable, 3 for the price because it is a little high but fits in the competitive price band, 3 for features, since it does what it should without problems. Usability scores a 4, it is a tough little box, ready for abuse, and I do like the trigger mechanism as it is smooth. With 4 for perception, this Andar box wallet gets a final score of 36 out of 50. 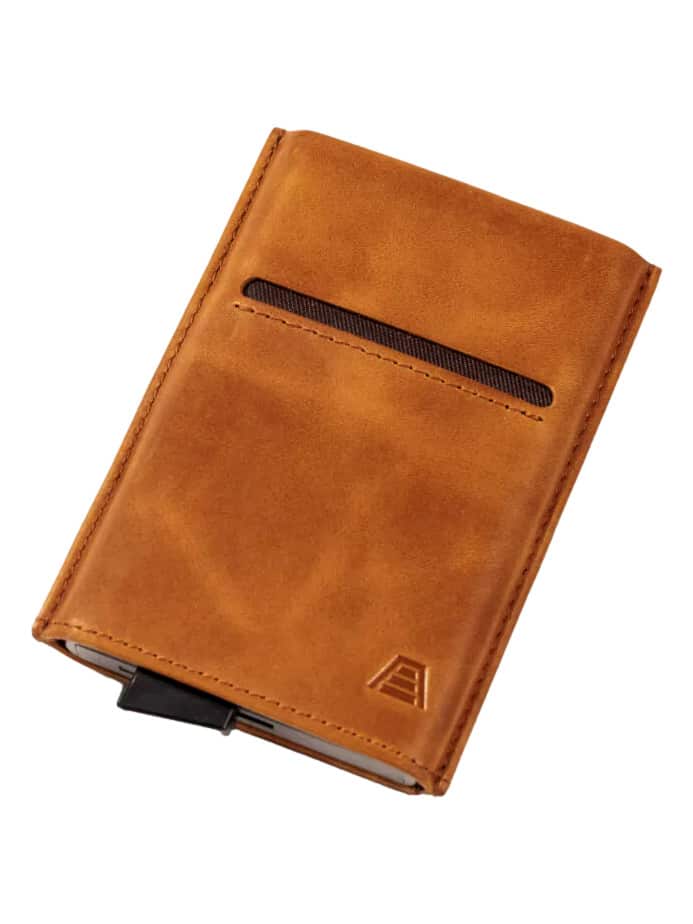 With The Pilot wallet, your cards are accessible with one quick maneuver. Simply pull the trigger to make your cards fan out. 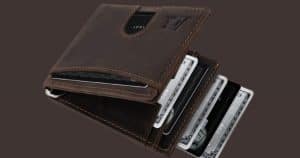 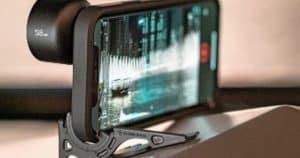