Harber London Business bifold leather wallet provides a very slim option which is comparable to the Bellroy Hide and Seek and Coin Wallet. With business friendly features like SIM card storage, double billfold pockets and a coin pouch, the diversity in what you can carry is very good. But there are a few things to note.

Harber London Business bifold leather wallet provides a very slim option which is comparable to the Bellroy Hide and Seek and Coin Wallet. With business friendly features like SIM card storage, double billfold pockets and a coin pouch, the diversity in what you can carry is very good. But there are a few things to note.

What makes a business wallet? If you are unsure, then, let’s see if the business wallet by Harber London will allow us to find that out. This one’s name, Harber, is spelled with an E instead of an O.

This wallet has no features on the exterior since its four card slots are all located on the interior. These slots would accommodate one to two cards per slot. In addition, it has an interior card storage with a pull strap that can be used for more archive cards and such. Furthermore, the interior seems to have a hidden card slot that takes in cards vertically. It has a SIM cardholder, and further in, it has another pocket that has a flap for protection, when we lift it up, it reveals another slot that could be used for another card. I suppose you could put coins in there if you want, as well. Moreover, it has got a very useful two-compartment billfold pocket area protected with a flap that goes over it. It is very reminiscent of other wallets we have previously seen, especially from Bellroy. With this wallet, you can store cash, different currencies, or you can store receipts for example, alongside cash. I think that, maybe, this is where we get the business, but I am not sure.

The Harber London measures 4.8 x 3.8 x 0.3″ and weighs 51 grams, which is pretty light. The company recommends up to 12 cards, which I think can easily fit. I put in seven cards and they would still slip out with some ease and their extraction is not so hard. Minimalist card carry is five, and seven is reasonable. I have inserted seven cards plus one in the hidden card slot and it does not seem to be a problem at all.

It is designed in the United Kingdom and made in Spain from a premium, full-grain leather. It is cut very thinly to achieve a slim functioning wallet, very similar to how Bellroy cuts its leather. Having this kind of cut gives them lots of options in design. The edges are rolled over and then sewn, it has got some good reinforcement sewing in the areas that we would expect, and the edges are painted. The lining that is in between all of the card slots is two pieces. You can feel it if you put your finger in and rub, there is a separate lining piece on different sides and that helps from a friction perspective. If one begins to wear out from utilization, then the other one will still be there to protect it. The cards are pulled out with the help of the strap. It was a little hard getting them in, so I am just wondering which way is the preferred way to put them in, I guess you could do it horizontally. However, it does not seem to be the most common way to do it, but it was a bit difficult because it creates some sort of bubble that interferes with the cards when they go back in. That is caused by the bridge that lacks reinforcement on either side, which means that over time, as it is pulled, it could begin tearing away.

This wallet is priced at $106. The thinness of this wallet is rather impressive. Being very thin, this is perfect for the rear pocket. It is a little large for the front, but it works well in a suit coat placed in a pocket. The interior card slots are very well placed, they all stack, therefore the cards do not have any issues standing on top of each other. It permits easy access to get the cards out, using the thumb, or a finger. It does take on some of the characteristics of the Bellroy Hide & Seek. It has the front card slots and a two-pocket billfold area, but it also begins to incorporate some of the features of the Bellroy Coin Pocket, and others where you have the coin flap, as well as a hidden card slot. What really engaged me with this wallet is the super thinness, it is very slim, yet the leather does not feel super thin, it feels really good and has got a very nice tactile feel. You can see the grain in this wallet and you can see that it does have a bit of a tooth to it, which does feel good. If this wallet gets thick, it would be due to the stuffing that it will take.

The final score of Harber London is four for quality, two for the price because it is a little expensive, four for features, another four for usability as it is easy to use and allows you to do all kinds of things by the way of its features, and finally, perception scores a three. This gives the wallet a final score of 35 out of 50. 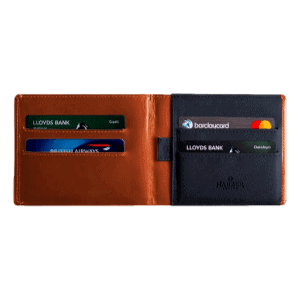 Harber London Business Bifold
$107
Buy Now
DISCLAIMER: Walletopia is reader-supported. When you buy through our site, we may earn an affiliate commission.

How to Clean a Leather Wallet? Read This First!

What is a Minimal Wallet? Should You Get One?

TRUTH behind RFID blocking wallets; its still a scam