“Imitation is the sincerest form of flattery” said someone who didn’t understand commercial enterprises. But that is what the Pirna carbon fiber wallet introduces as it provides an exact competitor to the original at a quarter of the price. Competent in its finish and function, for the price, it gives a nice carry experience.

Today we will be reviewing the Pirna’s Carbon Fiber Band Wallet. It comes in a nice tight box. When we open the box, it looks like we have some extra screws and a card that says we can register via Facebook Messenger. That is interesting. I haven’t seen that before. Of course it includes a thank you card and the review begging that happens. On the back of the card it provides easy instructions. It also comes with a torque wrench. All band wallets that have screws involved should come with these. This Pirna Carbon Fiber only comes with a money clip. I don’t particularly like them, but that’s fine. The company says it is made from 100% carbon fiber. It looks so much like another wallet.

Here are the features of the Pirna Carbon Fiber Band Wallet. This particular band wallet comes with a money clip that’s here on the outside. Money goes in here. I think that’s pretty obvious. There is a thumb push. The cards come in at the top where we have a card opening. Cards go inside and the wallet expands to fit them all.

I was able to get 10 cards in here as well as 5 slips of cash folded over twice. That means this will work with foreign currencies as well. The company says it is made from 100% carbon fiber. We’ll check that out in a future video where we are going to compare this one to one of its competitors that looks just like it. It is made in China. It says it has RFID protection. As an entry level band wallet it looks very nice and feels very sturdy.  As it is priced at $27, you really can’t beat it. This price is ridiculously low compared to other similar carbon fiber wallets. However, as I was comparing this to its competitors they are copying, it just doesn’t feel as good. The components, finish and function just aren’t as smooth.

It measures 3.44 x 2.16 x 0.3”. There is a one year warranty included. The company only sells on Amazon. Their main site is a one pager that promotes their latest product which is this, and it directs you to Amazon to purchase it. They have a contact form for the registration and warranty coverage which has to be done on Facebook Messenger. I think that would raise some support questions in the event you have an issue in the future, but it’s 27 bucks. It needs to be said that this wallet is a 100% knock-off of another wallet we have done reviews on, and I’m sure you’re familiar with, all the way down to the design elements. All is fair in love and war, so if you like that particular wallet and you don’t want to spend the money for it, you’ll have a decent comparative experience with this, but it all comes down to what you’re looking for. 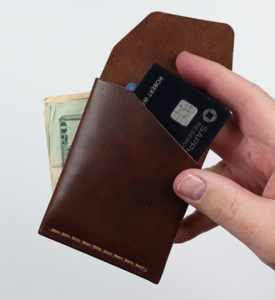