SECRID Cardslide wallet, how it works, or doesn’t?

Released to address the ability of carrying coins, keys, more cards and cash, the SECRID Cardslide wallet provides a great add-on, but do its weaknesses make it unusable?

The Secrid Cardslide wallet is a box wallet made from metal. The company recently came out with a version which allows you to carry coins along with your cards. The wallet is packaged in a little black box with the Secrid name on the front and includes instructions on how to use the wallet and a feature review. This wallet comes in several different designs, as well as different band colors. Do not throw away the box because it has a serial number on it which is very important for registering the cardslide, or any of your Secrid wallets, in case something happens to your wallet.

The Secrid Cardslide wallet’s box portion is connected to the bottom. The opening is at the top where you would insert your cards. The back of the wallet where the slide portion resides, can slide up which exposes a little compartment available for coins, cash or additional cards. The compartment is a bit shallow than what you would expect or how it looks, but is capable. There is a catch on the slide mechanism so it will not detach from the main box area when pushing it up, but it does not hold it down, that’s only done by the elastic strap.

The box area can hold four to six cards depending on if the cards are embossed or not. You could put two extra cards in the slide area instead of cash, or coins, but not all of them. The company indicates it can hold up to eight cards, but that would be the absolute maximum between the box (6 cards) and the slide (2 cards).

The wallet is made in Holland and was shipped to me from the Netherlands. Secrid set the standard for box wallets in 2007 and they have been innovating and producing exciting designs ever since. The trigger box mechanism has been tested on up to 100,000 operations, is very solid and reliable.

The interior mechanics look very common to other competitors wallets, but they are different and keep redesigning theirs for greater longevity. There are two separate pieces to this wallet which do not interconnect. This is one of the problems I don’t like, since there are no explicit rails which force a connection between the box and the slide portion. This means that nothing will keep it forced into alignment with the bottom slide. If I put more cards or cash in the slide than it can handle, it forces the box portion up beyond the lip of the slide. This opens up the slide portion which allows cards and coins to come tumbling out. The important thing to remember is you cannot overstuff the bottom tray compartment. Since the wallet is only held together by the strap. Yes, that is right, only the elastic strap, which does maintain its position due to the depression in the slide portion, is the only thing keeping the box and the slide together.

From the perspective of security, it depends on how much you place in the wallet and not on the reliance of the device or the wallet itself to hold it in place. Without the strap, there is nothing to hold it in place. It was designed this way, so if you are okay with this, great. But just understand that the elastic band is the only thing holding the slider back to the box on the front.

The wallet is priced at $76. As with all Secrid boxes and products, it is very solid. Because of the box materials, it has RFID protection.

It measures 2.68 x 4 x 0.75” and weighs 91 grams. With it being all metal, it would naturally weigh more.  The product has a two year guarantee and three years by registering on the website. You will receive a certificate of authenticity which ensures you have purchased the real thing and not a knock off product. 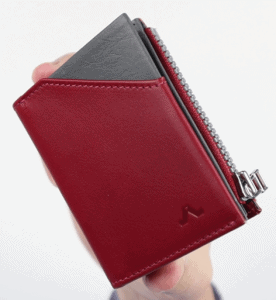 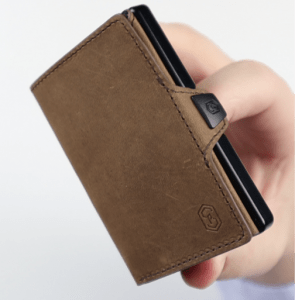 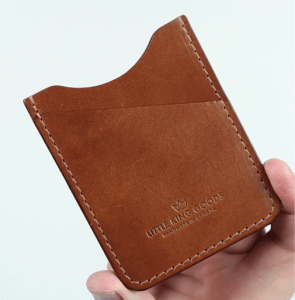